For men, hair loss tends to follow a typical pattern. Yet, before James Hamilton came up with his 7-stage scale, there was no standardizedway to measure or describe degrees of baldness. Thanks to him and to O’Tar Norwood, who revised the scale, improved it, in the 1970s,we now have a tool that is used to describe the stages of male pattern baldness.

Our specialists use this tool to understand the progression of a patient’shair loss and to determine a protocol for hair restoration.
A person with stage 1-3 requires less intervention than does someone in alater stage. This is why it’s good to come in before your hair loss becomesadvanced.

Thank you! Your submission has been received!
Oops! Something went wrong while submitting the form.

the stages of hair loss

Stage 1 of the Norwood scale is the control stage. People in stage 1 of male pattern baldness still have a full head of hair,with little to no signs of baldness or a receding hairline.

In stage 2, there is only slight evidence of a receding hair line, generally around the temples.

Generally, hair loss starts to become noticeable during stage 3. The hairline typically pulls backward from the temples, giving it a curved “M” shape when viewed from above.In the class A version of the scale, or stage 3A, the dips in the hairline may be slightly less defined.

By stage 4, there is significant hair loss. The hairline recedes farther and may start to resemble a “U” shape when viewed from above.The bald spot on the crown is larger, but there is still a strip of hair between the bald spot and the receding hairline.In stage 4A, a person will not experience a bald spot on the back of their head, but they will instead lose the dips in their hairline and have a deeper “U” shape when viewed from above.

Stage 5 shows similar progression to stage 4 but is more severe. There is still a small section of hair between the receding hairline and the balding crown. However, this strip of hair is much thinner than in the previous stage.In stage 5A, the hairline continues to progress toward the back of the head.

Someone with stage 6 baldness is now mostly bald on the front and top of their head. The two bald areas now join together, and there is no strip or patch of hair between them.There may still be hair on the sides of the head, but the crown and front of the head are now mostly bald.

By stage 7, the baldness also begins to affect the sides of the head, until only a thin ring of hair encircles the outside of the head. 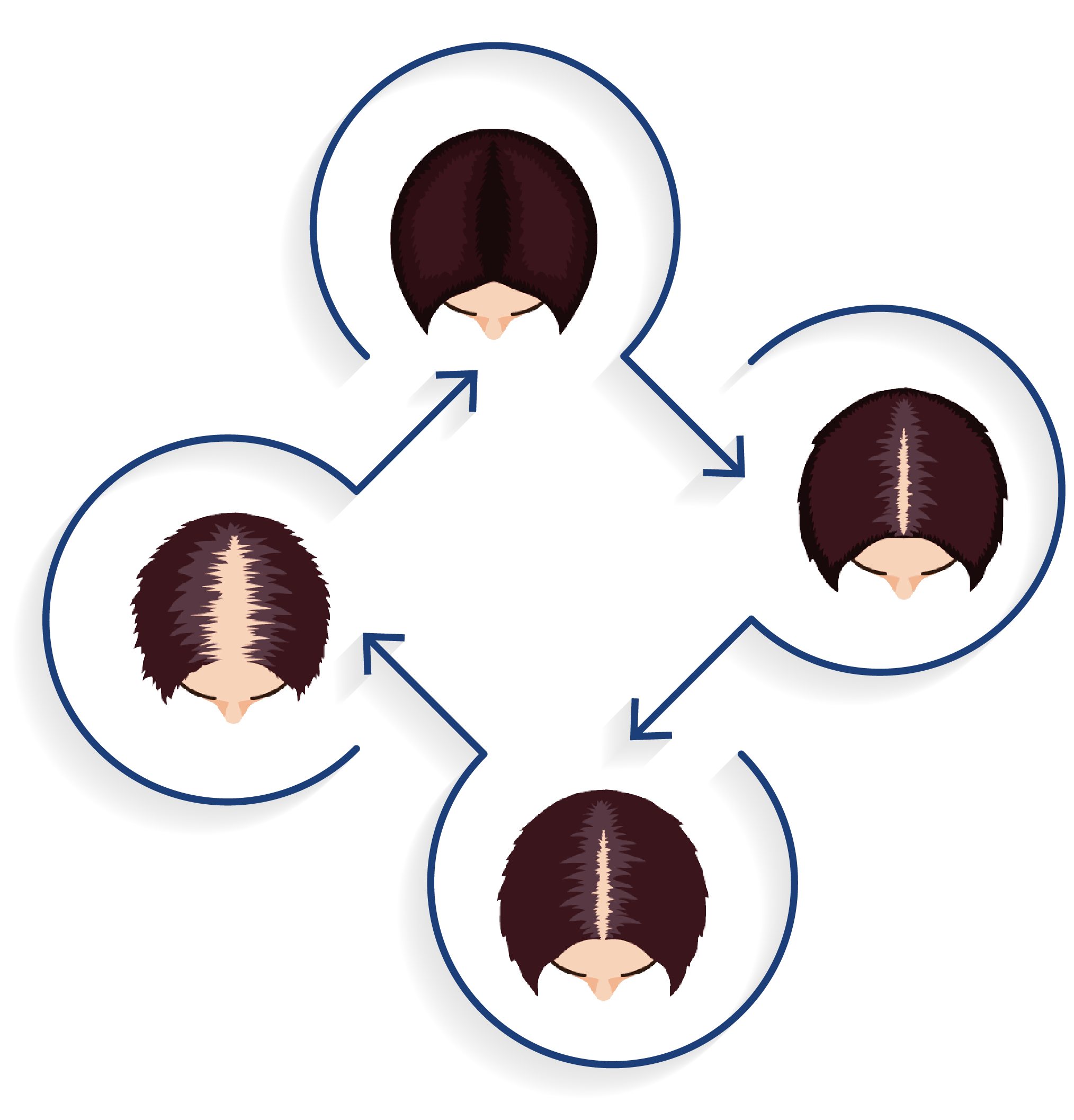 Female hair loss is a bit more complicated. It tends to follow less of a pattern and often manifests as a general thinning andwithout the hairline recession that men experience. Yet, the Ludwig scale was developed to describe the severity of a woman’s hair loss.It includes 3 grades 1 – 3 and is based on how much of the scalp is visible from the front due to thinning hair.